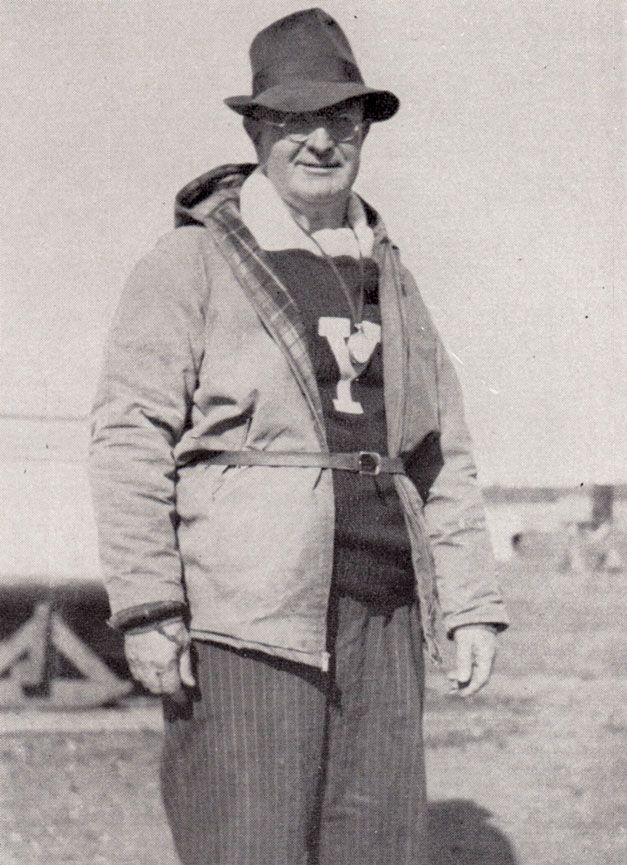 Roderick Beebe was a three-sport athlete at Yale and coached at Camp Pasquaney in New Hampshire before he relocated to the shores of Sippican Harbor to take over Tabor’s fledgling crew program in 1922. He joined the faculty as a history and math teacher, as well as coach of the football and crew teams. Although crew became his forte and first love, Mr. Beebe coached almost every sport the school offered during his nearly forty-year tenure at Tabor. In addition to coaching and teaching, Mr. Beebe also served as Tabor’s director of buildings and grounds, assistant to the headmaster, and athletic director.
By 1916, Tabor was one of the first American prep schools to establish a rowing program. In its infancy, the program relied heavily on occasional guest coaches. The permanent appointment of Mr. Beebe changed all that, however. Despite the many challenges presented by Sippican Harbor’s rough waters, Mr. Beebe  transformed generations of inexperienced rowers into competitive oarsmen powering exceptional crew teams.

In 1931, Mr. Beebe began Tabor’s proud tradition of taking the boys’ crew to the prestigious Henley Royal Regatta at Henley-on-Thames in England. This endeavor produced victories in the Thames Challenge Cup in 1936, 1937, and 1939, ushering in the “golden age” of Tabor rowing. This impressive series of wins is even more significant since the Thames Challenge Cup was a college race only open to international high schools at that time. Tabor’s record-setting success at Henley brought the school international recognition and made Mr. Beebe a legendary figure among fellow boatmen. He accompanied nine teams to Henley over his Tabor career, including the 1947 Henley crew, also inducted into Tabor’s 2020 Athletic Hall of Fame class.

A veteran of both WWI and WWII, Mr. Beebe was known for his dignity and idealism, and was beloved by the Tabor community as a wise counselor, perceptive teacher, and inspirational coach. Upon his retirement in 1962, he was said to be the “personification of the heritage and inspiration of Tabor.” Mr. Beebe’s ability to reach beyond teaching the skills of rowing to instill honor and motivation in his teams produced international champions and cemented Tabor’s place in rowing history.