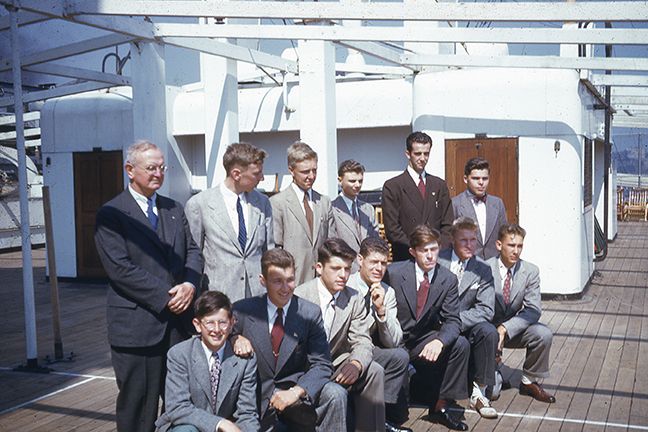 Tabor Academy’s 1947 Henley Crew will forever serve as an enduring example of how honor, empathy, and fair play in competition can transcend victory to lift the human spirit.
With the resumption of the Henley Royal Regatta in the aftermath of World War II, Tabor’s crew team traveled to Henley-on-Thames to compete for the Thames Challenge Cup. Tabor triumphed in their first three races, however in the finals, they once again drew their American rival, Kent School. Despite Tabor’s lucky ping-pong ball taped to the bow of their shell, Kent steadily established a lead, winning by 2 lengths. Although Tabor lost the Cup, the Associated Press reported, “The British themselves were all for the Tabor boys – the only [of the] foreign entries that lived exclusively on British rations during the regatta.” The acts of sportsmanship, fair play, and global citizenship demonstrated by the 1947 Henley Crew remains an inspiration to all.