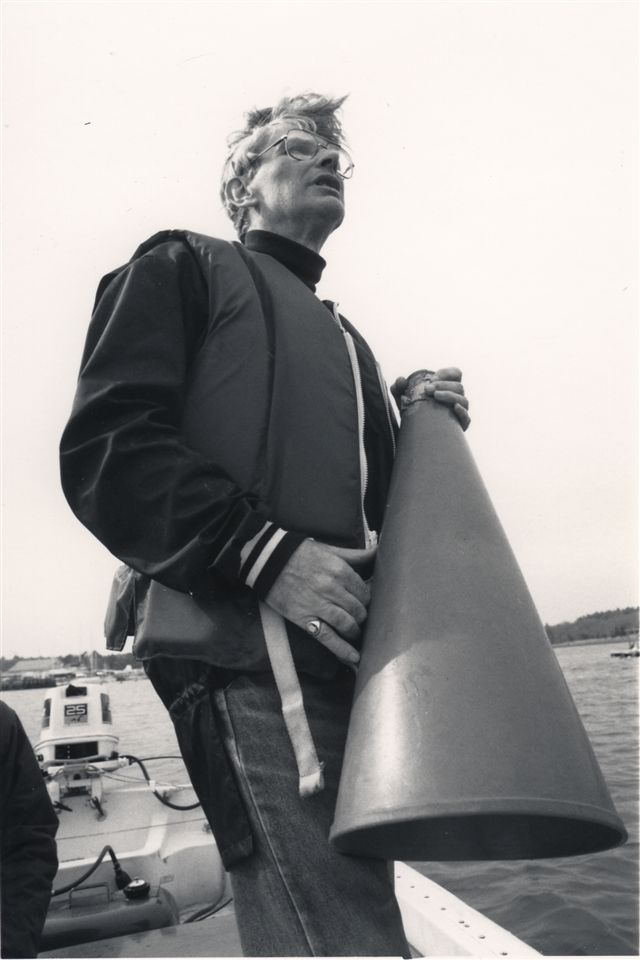 Coach 1966–1988: Cross Country • Track • Girls’ Crew
G. Bruce Cobbold earned his BA and MA at the University of Cambridge, where he read Classics and rowed for Gonville & Caius College. After spending seven years learning the art of teaching in his native England, Mr. Cobbold arrived in the United States in 1964 as part of an exchange program between his private school and Phillips Academy Andover. Two years later, he arrived on the shores of Sippican Harbor to teach Latin and Greek. During his forty-eight-year tenure at Tabor, Mr. Cobbold served as a Classics teacher, coach, drama club director, chair of the Classics department, coordinator of academic affairs, director of studies, assistant headmaster, acting headmaster, and senior master. He retired in 2014.
Mr. Cobbold began his coaching career as head coach of Tabor’s winter track team, a long-established program dependent on a portable wooden track. In the fall of 1969, Mr. Cobbold founded Tabor’s first cross country team, known as “The Harriers,” to augment the winter track program. In its early years, Tabor’s cross country team was inspired and encouraged by Arthur “Ace” Conro ’55, a three-time varsity letterman in track at the University of Maine, who ran with the team in practice and was often its sole cheerleader at meets. In 1977, the cross country team posted a perfect season of 15-0 and won the league championship. As a cross country coach, Mr. Cobbold was known for his purposeful coaching style. In the early season, he trained his teams for endurance, with many strenuous long-distance runs through Washburn Park and up Route 105. By late season, the focus shifted to speed, with fast, short-distance runs to Silvershell Beach and round the campus.

In 1973, when the school opted to end the winter track program rather than replace the wooden track, Mr. Cobbold spent a year coaching the gymnastics team. In 1982, he took over from Harry Hoyle and began coaching Tabor’s burgeoning girls’ crew program. For more than fifteen years, he guided the varsity and junior varsity teams as a head and assistant coach. His crews were runners-up in their division at the Head of the Charles in 1985 and 1986. In 1988, however, Mr. Cobbold’s ex-novice oarswomen, under head coach Abigail Rodgers, achieved greatness as they won their division at the Head of the Charles and the New England Championship. This crew team, led by Ms. Rodgers and Mr. Cobbold, was inducted into Tabor’s inaugural Athletic Hall of Fame class in 2016.
Former athletes know Mr. Cobbold as a coach adept at building wildly successful teams with runners and rowers of varying talent and a variety of personalities. A tremendous motivator, role model, and mentor on the fields, in the classroom, and on the water, Mr. Cobbold always pushed his student-athletes to be the very best versions of themselves and, in doing so, he has created a legion of grateful, successful, and devoted pupils in the game of life.