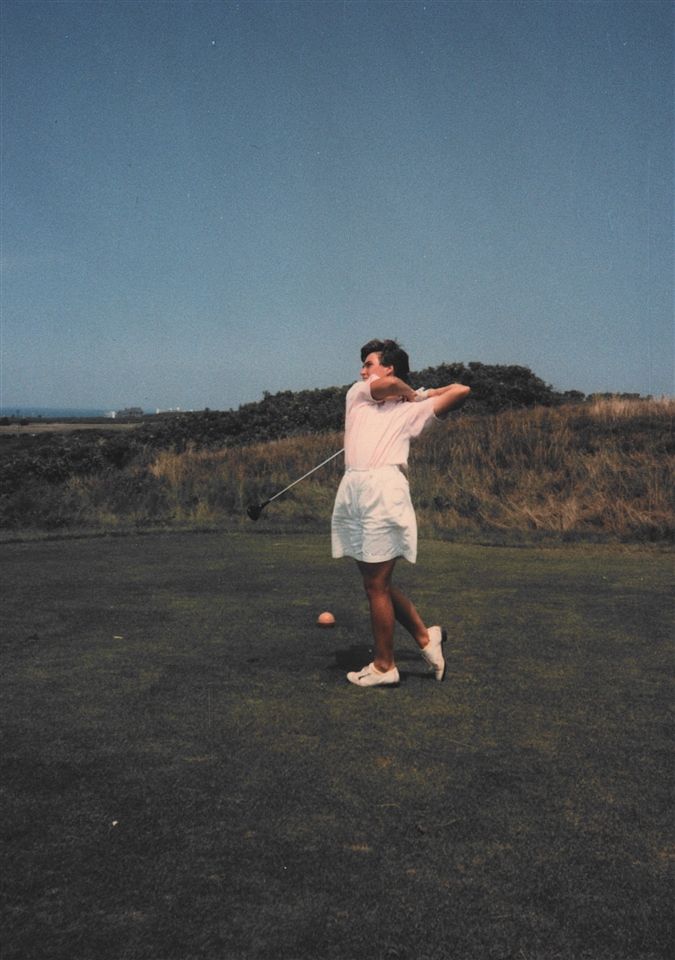 Loren Milhench le Gassick ’85, a native of Marion, Massachusetts, came to Tabor Academy in 1981 and was a pioneer in female athletics during the reintroduction of coeducation. Loren was a two-sport varsity athlete, excelling in squash and golf. Loren’s golf career is where she distinguished herself in Tabor’s athletic program.
Her match-play record was always among the best on the team, and she was, by a wide margin, the finest women’s player in the region. In addition, Loren competed exclusively against boys. Mr. Robert Sweeney, Tabor’s varsity golf coach at the time, along with Loren’s sister and teammate, Heike Milhench ’84, played an instrumental role in Loren’s success. Coach Sweeney would strategically pair sisters together in tough matches, which achieved a nearly one hundred percent winning record. This brilliant coaching decision, ending with angry boys on the opposing team, was a stroke of genius. Furthermore, the equality in prep school golf play buoyed Loren’s confidence on the course because the Milhench girls played from the same championship tees as the boys. This experience was very empowering for both Loren and Heike. Loren’s exceptional play, sportsmanship, and genuine admiration for the game garnered universal respect on and off the fairway. A natural leader, Loren was named co-captain of the golf team her senior year.

After Tabor, Loren continued to excel at golf, playing at Wake Forest University on the Women’s Golf Team for 4 years: 1985-1989. During her time there, she was on the ACC champion team her freshman year. Loren also amassed multiple state titles and won the New England Women’s Amateur. She competed in two USGA Girls Juniors tournaments, four U.S. Women’s Amateur Championships, and one Women’s British Amateur Championship. What cannot be underestimated is the confidence and self-assurance Loren gained while having her brother, Mark Milhench ’89, by her side as her confidant and caddie.

Today, Loren works with her sisters, Heike ’84 and Elke Milhench ’88, and brother, Mark Milhench ’89, in their family company, Milhench Supply. She has four children who all love the game and play at The Kittansett Club, Tabor’s “home” course.