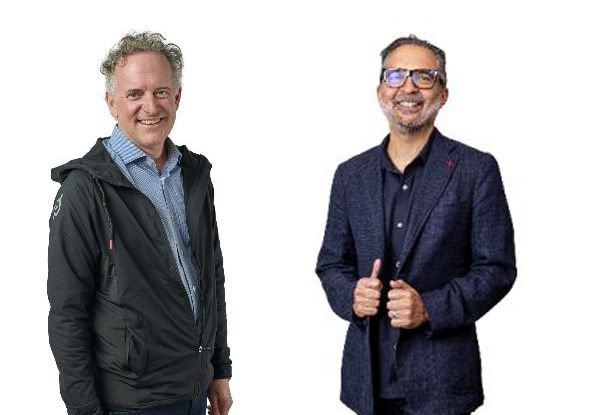 6/15/2021
Although 2020 was a dismal year for numerous small businesses and startups, venture capital firms raised more money last year than ever before – over $73 billion in the United States alone. And thanks to a thriving initial-public-offering market, as well as strong demand for innovation and digital acceleration amid the pandemic, venture capitalists and entrepreneurs expect even larger gains in the year ahead. Yet, even in a boom market, there is often more risk than reward. In reality, for every 10,000 startups that receive funding, only one hits the magical valuation of $1 billion or more. Fortunately for Tabor alumni currently hunting those elusive “unicorns,” James Joaquin '83, co-founder and managing director at Obvious, and Jon Callaghan '87, co-founder of True Ventures, will explore trends in venture capital and look ahead at possibilities for growth, where innovation is flourishing, and what ideas seem to be getting the most exposure in Silicon Valley.

James Joaquin '83
Co-founder and Managing Director, Obvious
James works with creative founders to define new consumer categories across food, consumer goods, and modern work. He leads Obvious’ investments with a plant-forward approach to food including Beyond Meat (IPO) and Miyoko’s Creamery, “good for you goods” consumer visionaries Olly and Welly, and companies at the forefront of how we find and do our best work with Incredible Health and Gusto.

James has been working in venture capital since 2007, and he has invested in a wide range of mission-driven startups including Plum Organics (acquired by Campbell’s Soup), TenMarks Education (acquired by Amazon), Opower (IPO), and Seventh Generation (acquired by Unilever). Prior to investing, James served as president and CEO of Xoom.com (IPO). He was previously president and CEO of Ofoto from its early beginnings through acquisition by Kodak in 2001, leading its growth into the world’s largest online photo service. James also co-founded When.com, an internet calendar and events service (acquired by AOL). He began his entrepreneurial career while studying computer science at Brown University, co-founding Clearview Software which was acquired by Apple, where he spent six years in engineering and marketing roles.

James grew up in a Portuguese fishing community in southeastern Massachusetts. He is a drummer, photographer, and master of puns.
Jon Callaghan '87
Co-founder, True Ventures
Jon is an early-stage venture capitalist and co-founder of True Ventures. He has been in the venture capital business since 1991 and built three companies of his own. His first was Mountain Bike Outfitters, Inc., which he created at age 18. Jon started his venture career as an associate at Summit Partners and then joined Greenhouse, AOL’s venture capital investment group and incubator. He entered the internet market early by joining CMGI’s @Ventures group in 1996. Before founding True, Jon was a managing director at Globespan Capital Partners. He currently serves on the board of ten companies, including Peloton.

First as a founder and now as an investor in early-stage technology companies, Jon’s direct startup experience has allowed him to see the world through an entrepreneur’s eyes. Jon’s career has been driven by a deep belief in the power of human creativity to improve our world.

Jon received a bachelor’s degree in government from Dartmouth College and an MBA, with distinction, from Harvard Business School. He was recently the chairman of the National Venture Capital Association. When he is not empowering the entrepreneurs of tomorrow, you can find him talking about airplanes or hanging out with his wife and four boys.
Back